The Atlantic Seaboard and City Bowl property market already tops R5.7 billion in sales for the first nine months of this year, a whopping 82% higher than five years ago, but agents report that unrealistic sellers are losing out on good deals.

Billy Rautenbach, Sales Director for Seeff, says that agents are almost unanimous in their view that seller expectations are hampering sales.

This four bedroom, three bathroom apartment in Clifton is on the market for R85 million – click here to view.

“After a rather subdued winter, we welcome the warmer summer months, traditionally a busier period for the market. The message to sellers, though, is that if you do not adjust your price expectations to match the deteriorating market conditions, time may well be running out,” says Rautenbach.

According to the agency, Propstats data shows that the total value of sales for the nine months to end September for the combined Atlantic Seaboard and City Bowl market stands at R5 752 615 370. While the rand value of sales overall is down by only 3% year-on-year, the number of units sold is down by 15%, “and our agents are observing a declining trend as the year progresses”, she says.

The market performance has been largely propped up by the sectional title sector which still offers lower, more accessible pricing, but Rautenbach says the sector above R15 million has slowed notably.

Adrian Mauerberger and Cecily Sher, luxury sectional title agents for the Atlantic Seaboard, note that it is mostly the sub-R8 million price sector that is still seeing activity, but there is a fair degree of ‘fence-sitting’ amongst buyers. “Although we have the challenge of high price expectations, there are many good buys in the market, and this is perhaps not the best strategy if you consider how prices have risen over the last few years.” 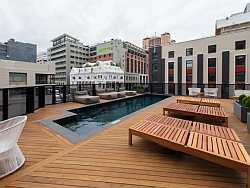 This modern two bedroom, two bathroom hotel apartment in the Cape Town city centre is on the market for R3.795 million – click here to view.

The average sectional title selling price currently stands at R7 030 321, a phenomenal 147% more compared to five years ago. Buyers should not hesitate to put in offers, even if it is below the asking price. Remember, when market conditions slow down, it is a good time to increase your property portfolio as you are able to buy at more conservative price levels. Once the market turns, you will reap the rewards.

Pola and Nadine Jocum who operate in Camps Bay support that view, noting that the suburb has seen some of the best value growth over the last ten years, and it remains a solid bet for investors.

Adding to that, Rochelle Serman and Lyn Pope who also operate in Camps Bay, note that while prices have stabilised, they are not likely to come down, and if you find a well-priced property, you should not hesitate. This area is not just a solid investment, but boasts excellent rental income and there is a high demand for short-term rentals. Older homes at affordable prices are highly sought and always a great investment for buyers looking to get in low and then upgrade and expand.

This four bedroom, four bathroom home in Sea Point is on the market for R13.9 million – click here to view.

On the seller side of the scale, the team notes that property stock has increased and continues to increase. That means notably more competition for sellers and much more for buyers to choose from. “We are seeing a shift to a buyers’ market and sellers need to keep their price expectations in line with that,” say Serman and Pope.

Karen Lurie who operates in the full title sector, says that even suburbs like Bantry Bay and Fresnaye now see sales activity largely below the R15 million price band. She too cautions that buyers should not sit on the fence for too long. The average full title selling price for the Atlantic Seaboard as a whole currently stands at R14 261 434 and, while this is down from last year, it is 78% more than five years ago (2015), thus a clear demonstration of the investment value.

Seeff’s City Bowl full title sales team of Colette Jackson, Michele Apperley and Doris Ricketts, say they are noticing that sellers are using online portals and advertised listings to set their asking prices. “This is a recipe for failure. You need to use a proper market comparison based on actual sales. It is vital also that you work with an agency with a track record. You may not want to hear their advice, but remember that it comes with many years of hands-on experience,” say the agents.

This six bedroom, six bathroom home in Oranjezicht is currently on the market for R10 million – click here to view.

The team also recommends that buyers not be put off by high asking prices. Put in an offer. Sometimes, when confronted with the reality of prices, the sellers may just accept. They also note that the R5 million to R15 million price band remains the most active, and sound a similar caution to buyers not to hesitate. The current full title selling price for the City Bowl, which stands at R6 922 625, is 118% higher compared to 2012, thus more than double in just five years.

Bryan Ginsburg and Hilary Biccari, Atlantic Seaboard sectional title agents, say they have seen a shift to a buyers’ market below the R3 million price range. In the Sea Point and Green Point areas, for example, the number of units sold is down by 23% from last year. Sellers should be wary of agents who are promising high prices as the data simply does not support that.

Mauerberger and Sher advise buyers to also take care not to overpay. Rather, work with reputable agents who hold correctly-priced mandates and can assist in closing a deal at a market-related price in the current economic environment.

On a final note, Rautenbach says that regardless of the state of the market, smart sellers, buyers and agents will always find a way through. Sellers need to take note of the slowing month-on-month trend. The FNB National House Price Index for September, for example, rose by just 4.1% while inflation has spiked to 5.1%.

“We are getting ready for the annual influx of visitors to the city and expect many to take the time to look into investing in property. For serious sellers, there is still time to make a good deal, but perhaps not for that much longer,” she says.

IGrow CA’s comprehensive range of Trusts, Retirement and Estate Planning tax services enable you to plan for retirement while ensuring that you pass on your assets in a tax efficient manner.